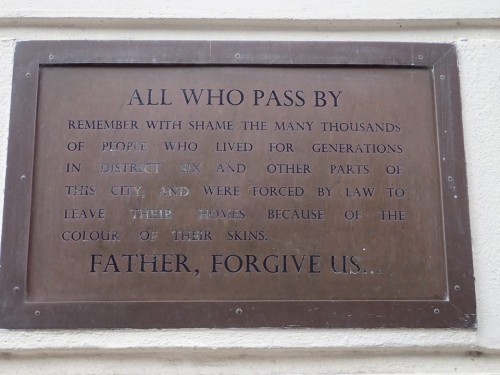 „We need to forgive. I don’t want to die from a broken heart, like my mom.“Ruth, victim of resettlement during Apartheid

I heard this sentence from a 69-year old South-African Lady yesterday, named Ruth. Right now I am spending time in Capetown on a study trip of my doctoral program with my study fellows from all over the world. Ruth gave us a walk though the so called District 6, which played a crucial role during the apartheid time in Capetown. Being a multicultural, interreligious quarter before, this part of town was violently changed through the Apartheid regime and their laws. Colored and black inhabitants, living there for generations, where forced to leave their homes, that were destroyed lateron. Ruth led us through the streets of her childhood, from where she was resettled violently. Her mother died only two days after she was rerooted and sent to live somewhere else. 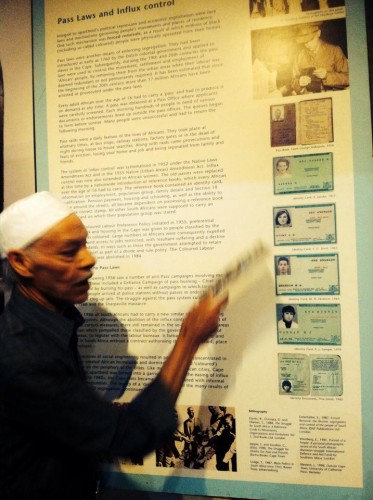 In the Museum of District 6 we heard similar stories that our guide Noor shared from his experience. His family was also resettled, after living in the quarter for generations. He was one of the founding members to set up a Museum in the district, introducing people to the story of the quarter and the experience some of the former inhabitants had to endure.

Both, Ruth and Noor shared the importance of forgiveness. It was important to them to stress this change in attitude and mindset, that’s needed in South-Africa and the significance of spreading this. It stroke me, how they invested constantly in the (still ongoing) process of reconciliation and the communicating this approach to history and the present time in South-Africa.
Forgiveness. Not seven times; but, seventy times seven. (Math. 18:22).

I asked myself, which impact the church had (and still has to have) on this process: In a religion that is all about community, using symbolic images like “Body of Christ” or “Kingdom,” reconciliation is about a life together on eye-level. Accepting all parts of the body with their gifts and problems is a challenging and ongoing task. Forgiveness is one way to ensure the metaboslism in the body of Christ. Perhaps it is so strinking and challenging to us in the west, since our individualization keeps us from getting on the next level communitywise. This thought is also linked with a point that Carolie Ramsey, a George Fox Advisor made earlier: „It is not about relationships, but far more about relation.“

In which ways can the christian faith contribute to the reconciliation process in South-Africa?

What are other actions and practices that can help the metabolism of the body of Christ in this process ?