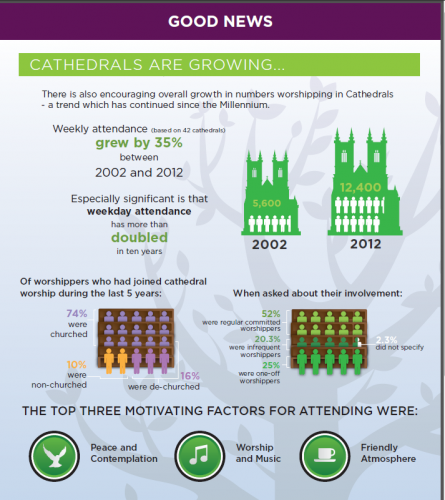 –       Fresh Expressions of church are growing with around 21,000 people attending in the 10 surveyed areas of the 44 Church of England Dioceses. These new forms of church include Café Churches, churches in drop in centres, Messy Church and churches which meet in pubs and bars or out in the street. More than half (56%) meet not in churches and over half (52%) are run by non-ordained leaders.

–       Weekly attendance in the Cathedrals grew by 35% between 2002 and 2012. In a survey of cathedral worshippers, peace and contemplation, worship and music and a friendly atmosphere were identified as the top three motivating factors for attending.

Justin Welby, Archbishop of Canterbury presented the suvey and commented the results: „There is every reason to be hopeful about the future of the Church of England, and indeed, all the churches in this country. There are many signs of growth, huge areas of development, and the church is – more than it has been for the last 60 years – demonstrating how essential it is to hold together our society.“

This week I read Charles Taylors „A Secular Age.“ The catholic philosopher promotes the idea, that in western secular societies, some Christian values are even more dominating now, compared to the time before the period of enlightenment. He deconstructs the common story of secularization, which states that reason and science banished religion, which his complex new theory.

“For instance, tourism, an activity involving masses of people in the late twentieth century; people travel for all sorts of reasons, but one is to see the important „sights“ of our and other civilizations. Now these are overwhelmingly churches, temples, sites in which the strong transcendent meaning of the past are embedded. Perhaps one might reply that this proves nothing, except that the civilizations oft he past invested heavily in the transcendent; those who want to see the monuments of the past, admire is art, etc., don’t have the choice; they have to find these in cathedrals, mosques, temples. But I don’t believe that this is all there is to it, but that there is also a certain admiration, wonder, mixed with some nostalgia, at these sites where the contact with the transcendent was/is much firmer, surer.”

And he also quotes Ernest Hemmingways “For Whom the Bell Tolls”:

„A feeling of consecration to a duty toward all of the oppressed oft he world that would be as difficult and embarrassing to speak about as religious experience and yet is was as authentic as the feeling you had when you heard Bach, or stood in Chartres Cathedral or Cathedral at Leòn and saw the light coming through the great windows.“

The catholic philosopher Charles Taylor is a bridge-builder. To him, being catholic means, to bring everything together. And in the pontifical approach Taylor closes the gaps between religions, scientific disciplines and political positions. He tries to analyze and interpreted modern secular developments without following the old construct of the decline of religion.

He looks at the yearning for transcendence and derives different results of religion in secular movements.

So. How can the good results by the Church of England be explained by? Is it really the human want for a transcendence of the secularistic human life into another dimension?  Is it this, what the interviewees meant, when they mentioned that they are searching for “peace and contemplation, worship and music and a friendly atmosphere?”