Heal the world, make it a better place

The call to make the world a better place is inherent in the Christian belief, biblical foundation and practice of Christian engagement in the world. To Change the World by James D. Hunter is a book about the possible and proper role of Christianity in American culture in the early twenty-first century.

Dealing with this topic the book is following the other books, I read earlier this semester, like Ross Douthat’s Bad Religion or Vincent J. Miller’s Consuming Religion – Christian Faith and Praxis in a Consumer Culture.

To me as a European outsider, this book was a tough read. It really dives into the history of church engagement in public and political life in the USA. I’ve never studied the links between culture and politics in the USA that deeply, that is why I was also not familiar with the term “culture war” (a term Hunter himself helped to coin).

A “culture war” was understood as a Christian tradition to be engaged in changing the nation for good. For the last thirty years, Christian leaders with diverse theological perspectives have analyzed and implemented a simple dependence:

Using an academic blend of historical, sociological, and biblical scholarship, Hunter deconstructs this approach, beginning by stating this main thesis: cultural change comes from the masses rather than the elites.

The book is a collection of three essays that deal with the church’s involvement with culture.

In essay one Hunter argues that much of the church today operates with a failed model of cultural engagement. He believes that the frequently discussed ‚hearts and minds‘ approach of contemporary evangelicalism is not working. While the church may be able to positively influence a large number of individuals, this individualistic approach leaves the church with no significant cultural capital in today’s society.

The second essay argues that the public witness of the church today has become a political witness. Hunter details how so much of contemporary American life has become politicized and influenced by a rather Nietzschean will to power. The church in American has uncritically accepted this trend as it attempts to make up for its lack of cultural influence by exercising strong political influence.

After examining the difficulties and problems that exist for the church in essays one and two, Hunter outlines his vision for cultural engagement in essay three. He offers a different paradigm for cultural engagement, he calls faithful presence. Hunter states that Christians approached culture with attitudes of „defensive against“ (Christian Right), „relevance to“ (Christian Left) and „purity from“ (Neo-Anabaptist). Faithful presence could be a new and different approach. It is not concerned with changing the culture or the world. Instead, Christians are fully present and committed in their spheres of social influence; it is a „constructive resistance that seeks new patterns of social organization that challenge, undermine, and otherwise diminish oppression, injustice, enmity, and corruption and, in turn, encourage harmony, fruitfulness and abundance, wholeness, beauty, joy, security and well-being“.

Rather than seeking political power, the church should exist as a culturally distinct group that seeks to support all people (Christian and non-Christian alike).

To Change the World is a book about the possible and proper role of Christianity in American culture in the early twenty-first century.

As a European looking at US-American culture I have a problem to sharply distinct „the public“ and „the political”, even after reading the book. To me, from an objective standpoint it is already challenging to understand the complexeties and bounds between culture and politics in the States.

I guess for people “in the system” it is even harder. 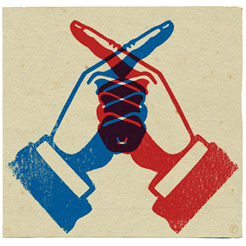 Hunter tries to offer solutions by providing socio-systematical theories. He for example refers to Pierre Bourdieu regarding his view of habitus and his idea of cultural and symbolic capital. He tries to unwind the cultural matrix from the political knots.

The most interesting part in promoting his new paradigm “faithful presence” was a new language, he was promoting. This reminded me of Saussure, we also read earlier.

It is not only about what we say, it is also about how we say it.

What language do you tend to use when discussing a biblically sound and culturally relevant approach to reflect on the intrinsic and subconscious matrix of political and cultural engagement as a Christian today?