Banksy is one of the worlds most famous graffiti artists. He designs his graffiti’s with a special stencil technique and spreads his ideas as a political activist almost like a communication guerilla. In doing so he is inspired by the French pochoir artist Blek le Rat and the Adbusters. By using public surfaces and walls as his canvas he increases his range of audience and reaches a lot of people.

Banksy is not only illustrating provocative art pieces like “Cardinal Sin,” a bust, which replaced a priest’s face with a „pixelated“ effect, as a statement on the child abuse scandal in the Catholic Church. 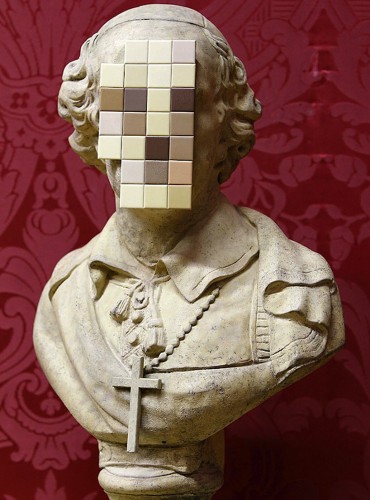 He also stages his art artistry almost like a art-action. In 2005 he created nine huge images on the Israeli West Bank wall during a trip tot he Palestinian territories. 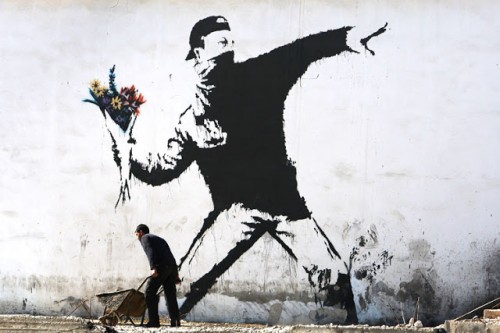 But Banksy himself plays with his role as the radical artist, who is the outlaw on the street. Sometimes he even installs his own art pieces in museums himself (like Tate Modern, London; Museum of Modern Art, New York, Louvre, Paris)and provokes the usual kind of domesticated art forms in galleries

After a few galleries and auctions sold Bansksy’s works, the so called “Bansky effect” was born. Max Foster coined to phrase to illustrate the growing popularity of street art.

The mural art piece “Slavework” (created 2012, during the Diamond Jubilee of Queen Elisabeth II), showing a boy, working at a sewing machine, sewing Union Jacks into a bunting became really famous. It had been removed from the side of a Poundland store in Haringey, north of London. Soon later it appeared for sale in Fine Art Auctions Miami’s catalogue. After protests and demonstrations of Harringey’s inhabitants the Gallery rejected claims of theft. The local community, after fighting to get the street art piece back now won the argument. The mural was pulled from being sold at an auction in Miami.

The two Canadian authors Jospeh Heath and Andrew Potter in their book “The Rebel Sell – Why Counterculture Became Consumer Culture” also engaged with the topic of capitalism, especially consumerism and consumption. They deal wit anti-capitalist issues, political activism and other critical movements. In their eyes these movements of backlash cultures failed. These are parts of “the system” and by acting in their structure (as provocative as they may seem) they are never a real threat for the society at all. Following an example of a capitalist shoe affair of Adbuster magazine the authors state that since the early 21st century the counterculture’s governing ideas of rebelliousness have become the „central ideology“ of consumerism. Capitalism is most vigorous when merged with counter-culture ideology. „Rebel sell“ almost emerged into a new philosophy from an critical outlaw status of political activists it changed into a marketing way to sell t-shits or pop-music.

Heath and Potter explain the history of capitalism in the beginning as a system that was concerned with selling people things they needed. But once those needs had been largely satisfied capitalism became about selling things that would make people feel distinctive. Rebellion is one of the most powerful sources of destinction. As a result rebellion has become one of the most powerful forces driving consumerism

Or, to put it with Banksy’s words, the provocative political activists, whose street-art murals are stole to be sold in noble art-galleries in Miami:

„We can’t do anything to change the world until capitalism crumbles.

In the meantime we should all go shopping to console ourselves.“